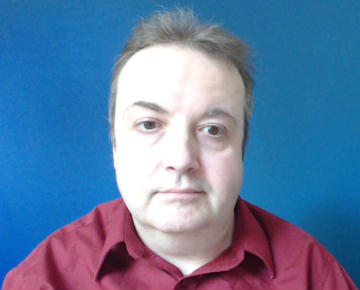 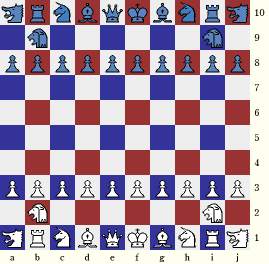 Chess variants are games that are related to, similar to, or inspired by Chess. There are many, many Chess-like games besides Chess itself, and I have the hobby of playing them. Chess variants interest me more than Chess, because I appreciate the variety, I'm not especially interested in competitive Chess, and I'm more interested in the intellectual challenge of playing such games than I am in the amount of memorization it takes to master Chess these days.

My interest in Chess variants began with John Gollon's book Chess Variations, but it remained a passing interest until about 1998. I had gotten my first Windows PC in 1997, and within a year I had come across computer programs for playing some Chess variants, particularly Xiang Qi and Shogi. Not long after, I began visiting The Chess Variant Pages and learned of a new program called Zillions-of-Games, which would let users program and play their own Chess variants against the computer. With this program, I began designing and programming my own Chess Variants. In 1999, I learned I lived in the same city as one of the people running The Chess Variant Pages. We became friends, and I became an editor for the site. Before moving away, I started working on PHP scripts for playing Chess variants by online correspondence. These became what I now call Game Courier, which now lets users program the rules of games using a language I wrote called GAME Code. In late 2015, I began to run the Chess Variant Pages myself.

I have been into computer programming since I discovered an Apple ][ in the Children's Room of the public library around 1980. I initially learned BASIC on the Apple ][, the TRS-80, the Commodore Vic 20, and the Commodore 128. Although I had initially intended to study programming in college, I naively thought I would become a writer and went into English. I then got interested in Philosophy and got my degree in that. When I switched from English to Philosophy, my logic courses no longer counted toward the formal systems of thought requirement, and I took a course on the Pascal programming language to fulfill it. This course was very important, because it introduced me to structured programming. After college, I programmed a real-time synthesizer for the 128 in both BASIC and machine language, but the platform went obsolete before I even had an opportunity to publish the code. I later got an Amiga and started using Unix machines in graduate school. During that time, I taught myself C, and I picked up Lisp while using Emacs. Using C, I wrote a spelling checker called AlphaSpell, and I wrote a personality indicator called the DDLI. After I was doing websites for a while, I started doing some web scripting in Perl and later in PHP. In 1998, a program called Zillions-of-Games came out, and this program would play strategy board games, including Chess variants, that were programmed in a scripting language similar to Lisp. I started programming Chess variants with it. Because it wasn't ideal for correspondence play, I later started coding what became Game Courier, a server for playing Chess variants by online correspondence. I wrote this in PHP, and I eventually designed a programming language for it, known as GAME Code. I could safely let visitors to the Chess Variant Pages program in GAME Code, because it lacked file I/O, which would be needed for spreading viruses or for hacking the site. Game Courier has since been my main programming project. I have also written lots of other code used on the Chess Variant Pages.

My Tastes in Media

I'll lump these together, because they are both forms of audio-visual storytelling, and some of the sites I use to track my viewing track both television and movies. I generally prefer television over movies, because it tends to tell longer, more fleshed-out stories in shorter segments. My favorite genres include fantasy, science fiction, horror, superhero, comedy, espionage, mystery, teen drama, historical fiction, and documentaries. I also watch Asian dramas and anime.

I have been around books my whole life, thanks largely to growing up in a bookstore run by my parents. Since I can't easily hold a book open with one hand, I took to reading comic books at a young age. I could more easily read a comic book when I ate, because I could lie it flat on the table without holding it open myself. I was mainly into DC and Marvel titles, though I sometimes read other publishers like Archie, Harvey, Dell, and Charlton. In the 80s, I got into some titles from First and Eclipse. But with the rising cost of comic books and the reluctance of comic book shops to run subscription services, I eventually quit buying them.

I started college as an English major and read lots of classic literature in my English courses. But I eventually went into Philosophy instead, which involved reading classic literature of its own. While I have read many books, I cut back on reading physical books once I got my first ereader. I found an ereader more convenient than physical books, and by propping it up on the treadmill and exercise bike, I could even use it to read books while exercising. My main ereader these days is a Kindle Touch, and I have also begun using the older Kindle DX Graphite for its larger screen. I have bought several Kindle books, and it is the main way I read books these days. I'll use an iPad for manga, but I generally don't like using tablets with LCD displays for reading books.

In non-fiction, I like to read books in science, history, philosophy, religion, psychology, and self-help. For fiction, I mainly read science fiction and fantasy.